Achieving a Hand-Embroidered Look on a Commercial Machine, Or, How to Give the Impression You Spent Days on a Single Design 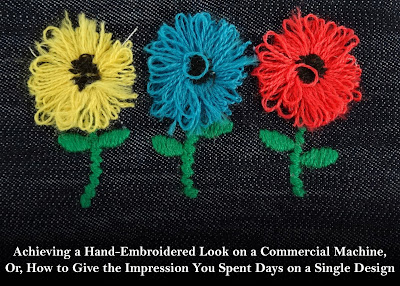 Call me old fashioned, but when it comes to a special effect, that effect does not have to shine, sparkle, glow, beep or move in any way. In fact, for me, a special effect can be as simple as creating a hand-embroidered look on a commercial embroidery machine. In the July issue of Printwear magazine, on page 54 (http://read.uberflip.com/i/694596-july-16), there is an article that describes and illustrates using many of Madeira’s thicker weight threads in order to achieve a hand embroidered look. One of the illustrations is of a design with three flowers, loopy petals, and you’d swear some doting grandma hand stitched it onto their darling’s overalls. The thread used is a heavy 12 weight wool blend thread that sews like a dream and looks like a million – hand stitches!

Remember that the process of creating a hand embroidered look by machine begins at the digitizing stage. If you don’t do your own, make sure you mention the fact to your digitizer that you are going to use a 12 weight thread. Another thread that gives a very family-friendly look is a cotton blend called BurmilanaCo, which was used to create an angel fish that is just swimming with personality. For a more sophisticated application, there are floral designs and borders that can be sewn onto curtains, bed or table linens for a look that will impress even the {most exacting} pickiest family member.

Now for the faint of heart, you are going to have to change your needle! These thicker, 12 weight threads require a larger eye #100/16 needle in order to perform properly. The stitches you choose should be based on their resemblance to hand stitches: satin, running, cross-hatching. A chain stitch, as illustrated in the Printwear article by the snowboard badge, is also a very good choice. Without looking at the neat appearance of the reverse side of these designs, I defy any expert to tell whether a very accomplished home seamstress – or a racing machine that can hit 1500 SPM – produced these designs. And as an added benefit, you’ll use far fewer stitches than with #40 weight thread.
So click on over to http://read.uberflip.com/i/694596-july-16 and see what I’m writing about. Master the use of thicker threads, and consider them one more arrow in your creative quiver of ideas.
Posted by Professor T.H. Read at 12:06 PM No comments:

How to Treat Your Major Customers

How to Treat Your Major Customers

All companies have major customers – they are the life blood of your business. Major customers represent 20% or less of the customer base, but about 80% of your revenue (*see below). Some companies haven’t formally identified these treasured customers and that’s a mistake, since the health of all businesses depends on them.


Major customers have a higher retention rate; they are more loyal, less price sensitive, and buy more products, more often. Once you know who they are, how should your marketing strategy deal with them? One school of thought says, “Market to them like mad. Get them to buy more.” That might work, but, in most cases, it is probably a mistake. Big mistake! The better option is to work to retain them.


How did these customers become major customers, anyway? They reached that point as a result of your getting most or all of their decorating spending. They are “maxed out” on your embroidery and/or screenprinting. A good example of what we mean is when a large bank found that they couldn’t profitably market to their major customers. Those depositors maintaining high savings balances would shift to CDs or other savings instruments, but the overall amount of their balances wouldn’t change. An analysis showed that five percent of their customers provided 80% of their profits. Getting these five percent to put more savings in their bank would have been useless; they already had it. So what should you do with major customers?  Work very hard to retain them.


Think up, invent and provide them with special services that you couldn’t afford to provide to all your other customers.

Whatever you can do, let them know that they are very important to you, and show it by special services and gifts. So if you haven’t developed a special program for your major customers, get busy. It may be the single most important customer relationship program in your company.


*The Pareto Principle (commonly known as the 80/20 rule) states that, for many events, roughly 80% of the effects come from 20% of the causes. Management consultant Joseph M. Juran suggested the principle and named it after Italian economist Vilfredo Pareto (instead of naming it for me, and I was so close!). It’s a common rule of thumb in business. For example:


80% of a company's complaints come from 20% of its customers


Hence, many businesses have easy access to dramatic improvements in profitability by focusing on the most effective areas and eliminating, ignoring, automating, delegating or retraining the rest, as appropriate.


The bottom line is, take care to maintain your major customers and work to move some of the 80 percenters up into the 20 percent realm.