As we face the winter months with repeat snow storms here in New England, we can’t help but want to surround ourselves with all things warm and cozy. Which is why we are especially inspired to embroider with our wool-blend Burmilana #12 thread around this time of the year. The fuzzy wooliness of Burmilana gives a hand-crafted look on garments and adds depth and texture, perfect for achieving a unique feel to your embroidery – part vintage, part folk art. It is also ideal for use with chenille and chain stitch embroidery attachments. 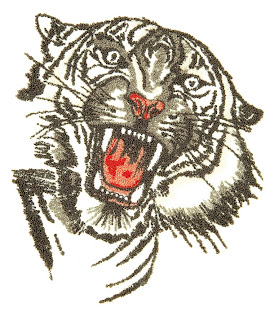 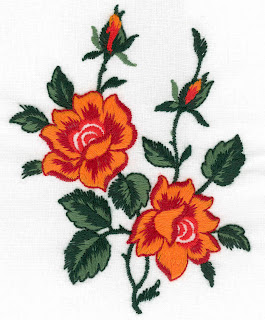 Working with Burmilana #12 isn’t scary or difficult. Here’s a few helpful hints when working with Burmilana #12:
You may also want to try our Schmetz FHS (Fixed Hook Setting) Needles. They're designed for heavier weight threads and do not require you to adjust the timing on your machine.
There’s no reason to be afraid of trying a specialty thread, such as Burmilana. With a little know-how, you can achieve amazing results. 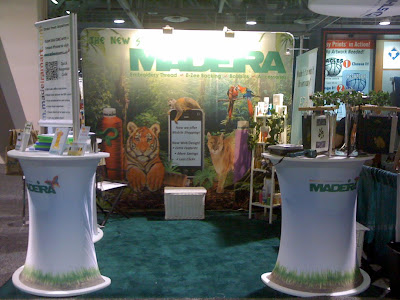 We kicked off the 2011 tradeshow show season with a roar – literally. At the ISS Long Beach Show on January 21 - 23, Madeira unveiled it's new tradeshow booth design – complete with tiger roars and rainforest sounds. This year's tradeshow booth theme is "A New Species of Shopping" with the launch of the Madeira mobile website and the upcoming web redesign in March. We also continued our commitment to being eco-friendly with re-useable totes given out at the show. ISS Long Beach was a great show and we enjoyed getting a chance to speak with our friends and customers who stopped by.

Thank you to everyone that stopped by our booth and hope we see you at future tradeshows this season! 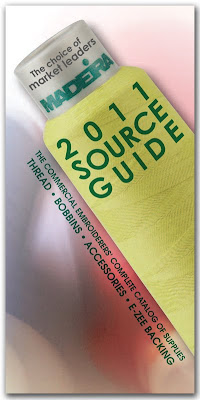 Madeira's NEW 2011 Source Guide, a complete catalog of Madeira's embroidery thread and supplies is now available! Download the electronic copy of our Source Guide online by clicking on the link below and get up-to-date pricing on your favorite products and see what's new!
www.madeirausa.com/source_guide